Welcome to December 1st and the first day after National Novel Writing Month!

I hope if you participated, you achieved your big WIN and have the euphoric ambition to continue with your novel into December and beyond. Even if you didn’t get a NaNo-defined win, I hope you were able to make some solid forward progress and accomplish some personal goals.

Because that’s what NaNoWriMo is really about as far as I’m concerned–making us into more productive, more consistent, more successful writers.

I haven’t had much success at NaNoWriMo previously. Last year, I created an account, wrote one day, and then fell off the wagon. Then for Camp NaNoWriMo, I got through about half of the month before I burned out and spent the next several months not writing and in a state of self-loathing for not writing.

In October, I made myself join and participate in a few Facebook writing groups, namely Ninja Writers and Your Write Dream. I cannot stress how helpful these two groups were for me to get the kick in the butt I needed to start writing again. So much so that I got the bug to try NaNoWriMo again.

In fact, I wrote a post about it here.

1667 words per day sounded like a good way for me to reach the dreaded burnout followed by self-loathing. So I decided to up my normal word per day goal of 300 to 500. I knew going in this wouldn’t get me to 50,000 by November 30th, and I was okay with that.

I pre-planned. It was a truncated pre-plan, because I made the decision to participate in NaNoWriMo literally less than a week before November 1st. I had a solid idea of the beginning, middle, and ending. I wrote about half of the outline. I bought a new set of pens–I decided to try the Papermate Inkjoy pens and found an 8-pack of assorted colors. I bought a new full-size 5-subject notebook–I decided to write my entire first draft longhand. I bought a new half-size notebook–my standard for note-taking.

On November 1st, I started writing. I wrote every day for 30 days straight. A few days, I only managed a few sentences, but I still added to my word count. I aimed for 500 words per day and accomplished that all but three days. I participated in writing sprints with the Ninja Writers group every Sunday–several times during the day we would write as much as possible for thirty minutes and then report back. They were my most successful writing days in all the time I’ve been writing. 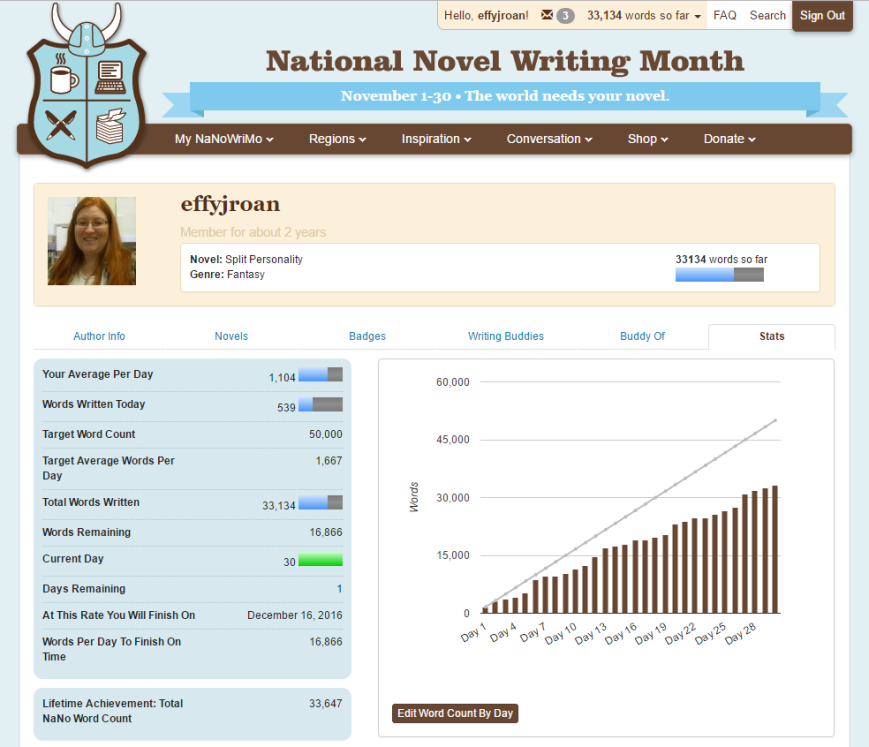 I may not have won in the definition NaNoWriMo uses, but I feel I won because I made a writing habit and I didn’t burn myself out.

My goal for December is to continue writing every day and to finish my first draft. I’ll also be working through pre-planning another novel in the Plotting Workshop.

The premise for this novel?

A chivalrous knight has his black and white world turned upside down when his lord and lady are murdered and their daughter disappears.

Between that and writing a book for work (among other projects), I think I’ll have a fairly busy winter.

End Note: I’m not impressed with the Papermate Inkjoy pens. They write nice and even but I don’t think they lasted as long as they should. About 130 pages in and five of the eight are already dead, with two more close behind. Some quick math and I estimate each pen only wrote about 20 pages each.