Ireenia has been in a number of transmogs since I started leveling and then raiding with her.  In this most recent tier, I realized I was fond of the look of her tier set, and decided to make her mog around it.  Most of it is the T16 Seven Sacred Seals set, with weapons also from Siege of Orgrimmar.  I find the off hand (Purehearted Cricket Cage) most interesting, because it actually has a cricket inside.  In fact, the cricket moves… 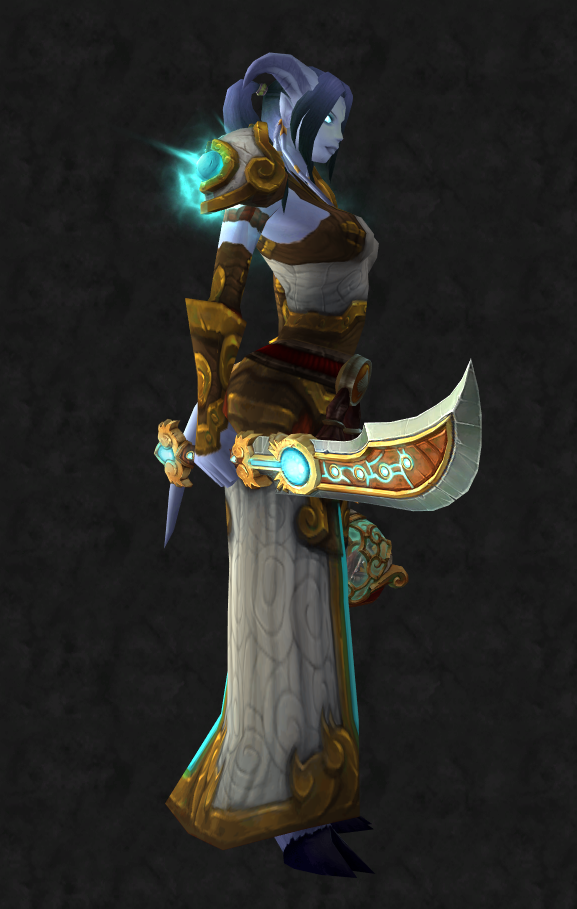 Taurens taurens taurens!  Along with creating my Horde Monk, I also made a Pally on my other account.  At first, I leveled the two together, until I realized the Monk XP buffs would make it nearly impossible.  My Pally is waiting to be leveled, and I knew that I could not do that without creating a transmog for her.

Okie, so admittedly, while I am between semesters, I think I have gone a wee transmog-crazy.  So be it.  🙂

I was looking for an appropriate set for my wee Horde Monk for when she reaches 90 – which will definitely be soon!  I wanted something in a teal-ish color, and something that did not look too overly Druid-ish.  In the process, I found a fabulous PvP set with not only animated shoulders, but an animated helm!  Effy’s T10 with the shoveltusks and her T13 with the ghost wolves have always been some of my favorite pieces in the game…

So this was just too good to pass up, and might even convince me to show Laelei’s helm!  (We will see…)  First the outfit without the helm, then with.  🙂 Staff of Trembling Will

And then the outfit with the helm… My Panda Shaman recently hit Level 90, and has no trangsmog set yet.  <gasp!>  I was working on a teal-colored outfit for a while (Fidelity), but realized a blue outfit would be far more fitting (Amity).  I like the teal set, but I like the blue set far more!  (I might be partial to blue, especially when it comes to Shaman.)  I thought pants would be more appropriate to her Enhancement spec than a kilt.  Eventually, though, I should make her a Resto transmog as well. Fist of the Deity x2

A while back, I posted on Twitter with a shot of this outfit for DK-Effy.  Somehow (cough – school – cough) I got distracted and never made a post of the outfit.  Fixed!

I wanted something frosty for my DK, even though she is only ever Blood.  I thought this was a nice mixture of expansions and such, which surprisingly includes only a weapon from Wrath.

It was brought to my attention recently that I have never formally posted Effy’s current transmog.  So I have been meaning to remedy that.

Unfortunately, my poor Shaman is stuck with a staff at the moment.  So I have it mogged with her outfit.  My preference would be a mace and shield.  So I have listed the alternatives at the bottom. 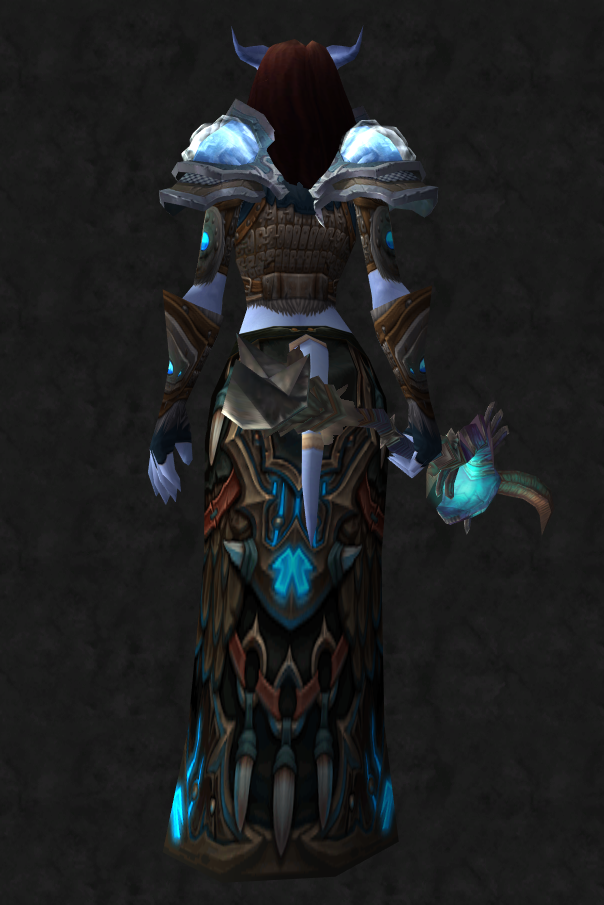 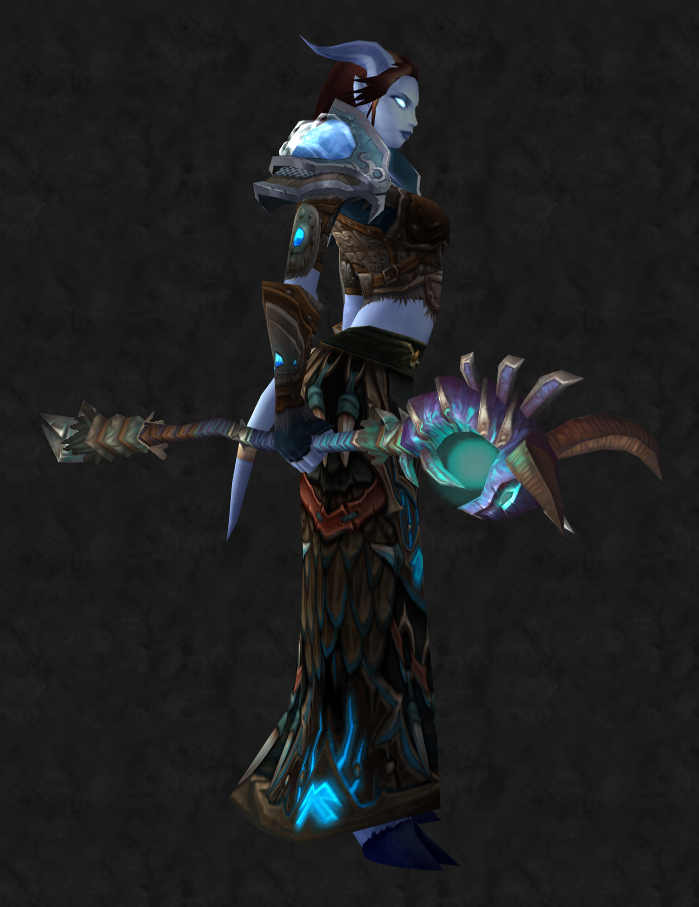 My preference would be a mace and shield, though… Lost Pavise of the Blue Flight

Laeleiweyn of World of Lae has challenged bloggers with 11 weeks of Alt Appreciation!  I happen to be a huge altaholic, because I love leveling, love learning new classes/specs, and I most of all love writing stories for my many characters!  So I definitely felt this was a challenge I had to take on.

The Mage is one of my least-played classes.  I have tried leveling one a few times.  I think it is mostly the fact that they are a pure DPS class – I cannot heal or tank with one, which is where I am more comfortable and where I am most likely to level faster through dungeons and then to get groups faster at max level.

So I was thinking about what to do for #MageWeek.  I read the post about names in World of Warcraft, on Gamasutra,  I was intrigued about the reasoning behind Mages having the most diversity in names.  I think this is because of their three diverse specs – Frost, Fire, and Arcane.  It might also be because the Mage is one of the most iconic and easily recognizable classes in a fantasy world/game.

So to show my appreciation for Mages and their diversity, I decided to update some of my previous Mage transmogs for the three specs. 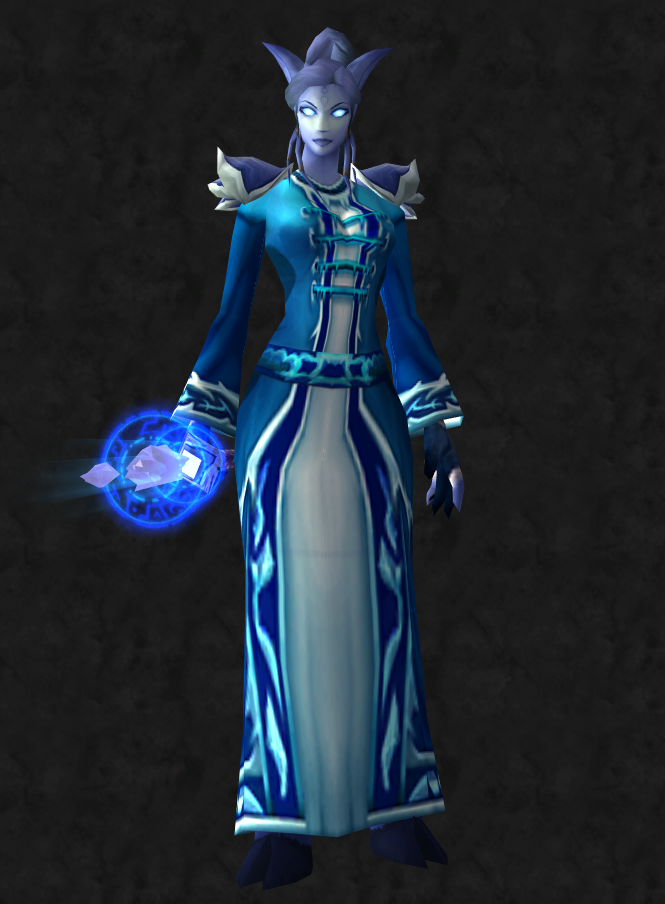 Frostfire Shoulderpads – If these were still obtainable (other than the BMAH), I would substitute these.  There are so few good, frosty pieces. None of my Mages are very high level…  It is kind of embarrassing. 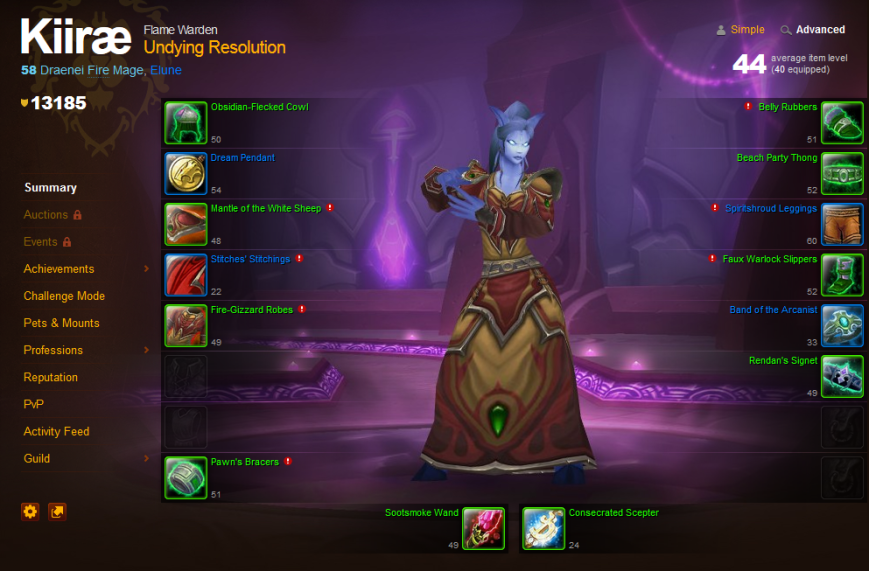 Kiirae is my biggest success at leveling a Mage, so far.  Back in Cata, I discovered Fire, and had quite a bit of fun with it.  I have not done anything with her in MoP, except to use her as a bank toon.  As a story character, Kiirae appeared in Descending Twilight Part 2, and later became a mentor of sorts to my Monk, Ireenia, due to the fact they are both Blue dragons.  For this reason, Kiirae should technically be a Frost Mage, and not a Fire Mage.  Hence the Frost outfit above.

Aethelwulf is Eduard, the patron of House Wolfsbane.  You might notice that his Armory profile shows him as a Warlock…  Well, he is a Warlock, but since creating him and my stories of his family, I have realized that he would more appropriately be a Mage.  So in a recent story of Eduard and Gaeladrial, for my #DruidWeek post, I finally made him a Mage.  A Fire Mage!  So, the transmog above, I have decided that is his outfit from that story. Maeyv appears in a few stories, part of a larger story I have yet to complete.  She hears the voices of the Old Gods, and this makes her seem a bit crazy to others – in fact, she probably is.  Maeyv began as an actual roleplaying toon.  When I was on Wyrmrest Accord, I dabbled in trying to roleplay.  I created her, and she wandered Goldshire, until she had an interesting conversation with a dwarf there.  It made me realize two things:

Maeyv is a quintessential Mage, and in my mind that means she is purely Arcane.  Therefore, she has the Arcane set above.  Her set started much like the one on her Armory profile, but I thought the new set looks a bit more grownup.  Oh, but Cat is definitely still part of the outfit.  🙂

Keep an eye out next week, for my Alt Appreciation #MonkWeek post!

While I am quite fond of Ireenia’s current outfit, I have been playing with some other ideas.  Though I usually prefer to be wearing at least most of the mog I am publishing, my transmog farming time has been quite limited, and I was getting antsy about posting these.

The first started out as a slight variation on Ireenia’s current outfit.  I came across a leather hood in Ireenia’s travels – the Cowl of Defiance to be exact – and I realized I kind of like it on her.  It makes her more mysterious.  Along the course of looking at other, similar hoods, I found the Hood of Rampant Disdain.  I really like this on Ireenia!  It even sticks to her class color with the teal.  So the Harmony Set is built around it.  With pieces in Firelands, which I cannot solo, and a rep piece from the Argent Crusade, I quickly realized this was going to take me some time…

So then, I started working on a blue set!  Thus, I give you the Tranquility Set!  I really, really like this set.  I just have to convince myself to go run some LFR…  And how perfect is Life and Death?  The colors are perfect, and it looks like a dragon!  😛

Soulblade of the Breaking Storm The complicated part about Worgen?  Putting together an outfit that looks good on both a Worgen AND a human.  heh  It was also really hard to make a plate outfit for a male toon in purple!  It was a fun challenge, though, as purple is my beau’s favorite color.  But what is up with there not being a Worgen male human form with a shaved head?? I have not posted any transmog in a while!  So Happy Friday, and enjoy!

Here are the sets I have been working on for my Hunter, Rosaelyn.  I have become quite fond of her black set, but I wanted to work on something in blue as well.  Blue being my favorite color, in case I have not made that quite obvious.  🙂

My biggest source of frustration for these – human feet.  I am so used to hooves that it seems I am near useless at finding good boots.  Most boots on humans look so huge and bulky.

I actually prefer the Blackforge Gauntlets, but the Yaungol Slayer’s Gloves worked better with the only boots I really liked.

Rosa is my former pseudonym and hopefully to be the star of a new story post soon.  My schedule has just been so crazy lately. 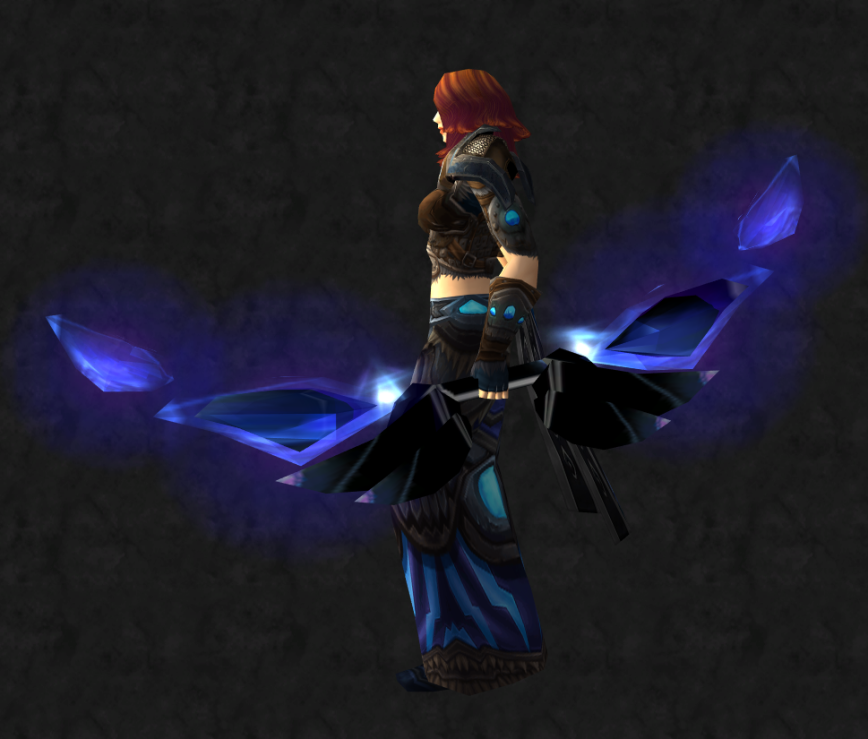