I apologize in advance for the gravity of this piece.  Usually I am not this melancholy, especially on my blog, but it was necessary for me to get some of these thoughts and feelings out of my head.  To do so through the eyes of Ireenia just seemed appropriate.  I suppose it is both a confession and a projection, to share such personal thoughts through the fictional eyes of a dragon.

This is in no way a justification, merely an explanation – to myself and to the one I hurt so.

The song here is one that reminded me of him before, and has become a sort-of daily penance since. 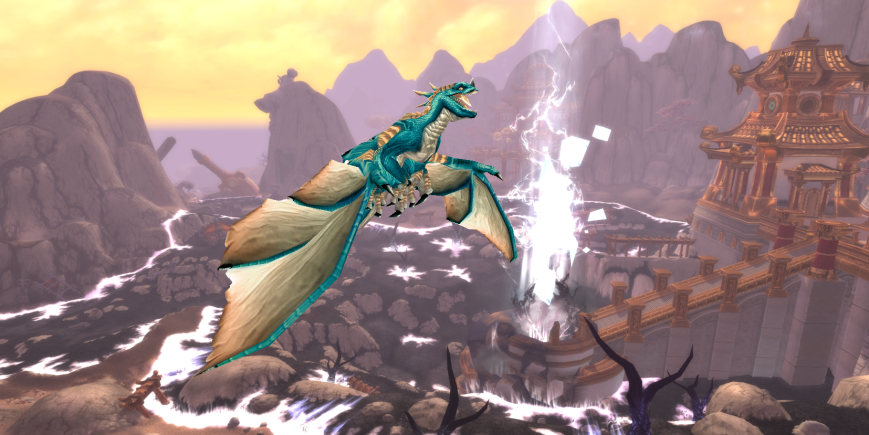 The young blue dragon’s agonized bellow pierced the air and echoed off the surrounding mountaintops as her wings shredded the nearby clouds. With a wide swipe of each claw, she slashed their wispy remnants from the sky for good measure.  Growling and continuing to hover high above the scarred Vale of Eternal Blossoms, a fitting reflection of her inner turmoil, she briefly wondered what the people below might be thinking about her outburst.

Ireenia felt confident no one would guess that a dragon could be heartbroken.

What do dragons know of love, anyway? she mused silently.  Apparently, not much.  But the heaviness in her chest argued otherwise.

A year ago, when she was still a whelpling, Ireenia had known almost nothing of love, except that between parent and child – of that she witnessed much.  Of romantic love, she knew it only from watching her adoptive parents, and how easily they fit together.  They made it look so wonderful and so effortless.  The obstacles they overcame were many, and each hardship served to further strengthen the bond between them.

Then one day, Ireenia met a man, and it was not long before she learned what it felt like to be in love.

She remembered what it felt like to kiss him, the touch of their lips meeting, tongues caressing.  She remembered the warmth that started at her cheeks and spread throughout her at the press of his body, the electricity that accompanied his hands sliding along the small of her back.  She remembered how it felt when he would brush his hand along her cheek and through her hair, the swelling of her heart that she learned to crave more than anything.

A single tear escaped from Ireenia’s eye.  It broke her from the melancholic memories for a moment as she pondered the fact that she could cry in dragon form.  She had only ever cried when appearing as a Draenei.

The first time was the day he left.

Ireenia had not let him see those tears.  Instead, she wore a stoic face throughout it all.  She thought she was doing the best thing.  She thought if it was over, then what she needed was to preserve herself and shelter herself from further pain.

Then, when he walked out, she crumbled, she fell apart, she felt the pieces of her heart shatter into tiny pieces like a broken vase laying on the floor with no hope of ever getting all the pieces correctly assembled again.

Honestly, she thought it impossible to ever feel that kind of pain.  No broken bone or sword’s cut or magic’s burn could compare.  It was a pain no healing magic could soothe.  She felt it was the worst pain she could ever feel.

Again, she was wrong.

Ireenia tried to reconcile, to talk to him.  Through tears she could no longer hide, she explained the hurt, the emptiness.  “I miss you,” she said.  “I love you.”

He did not reply as she expected.

He explained how her coldness had driven the wedge; she had pushed him away.  He told her how that lack of emotion had made him feel alone in a time when he most needed her.  The pain was clear on his face; the agony was evident in the quaver of his voice.  Then, he admitted how that loneliness, that loss, that heartbreak, had cauterized his feelings for her.

He said many things that broke her heart all over again.

Ireenia did not know how to reply.  It changed her entire view of their parting, gave her a perspective that had never occurred to her.

“I did not know,” she remembered saying to him.

“It is too late,” she recalled him replying.

His final words echoed in her mind, over and over.  Ireenia had returned to her Draenei form, and the tears flowed freely now.  She knelt on the sharp stones of a mountain peak, face in her hands, and she did not try to stop those tears.  It was appropriate for her bleeding heart to be bared.

She deserved to serve this penance.

She knew it was her fault, all of this.

This story is based on worlds and characters in World of Warcraft.