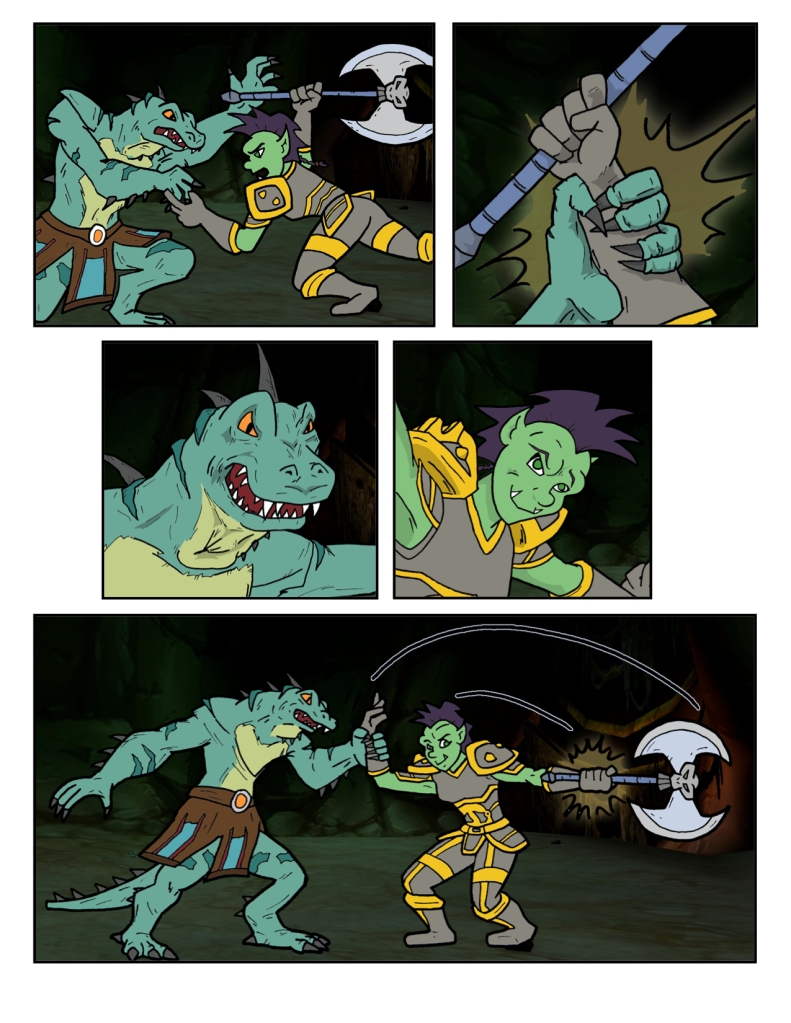 Saurok Fight, from the War Chief’s Command Board

First let me note that the image above was basically the only good saurok fan art I could find, and happens to be from one of the few WoW blogs I still read–The Warchief’s Command Board. So I am happy to give Garrosh his due credit here. 🙂

Simple enough and one of the genres I enjoy dabbling in. These days my writing isn’t completely suffused with romance, but it’s still pretty common. The prompt expanded to mention using body language and facial expressions to convey the feelings going on. So I made that a goal with this piece.

When I started thinking about the prompt, my mind immediately went to a piece I started a while back but never finished or posted. So now seems as good a time as any! So fittingly, I have WoW fan art in the form of a comic above, and WoW fan fiction below. This is a follow-up piece to Broken (if you need a quick catch-up), and features my Monk, Ireenia. She is a young orphaned blue dragon whom my main, Effraeti, saved as an egg and raised. So Ireenia’s preferred humanoid form is a Draenei. And sorry, you get an old model Ireenia, because my account isn’t active.

What started as an altercation between Ireenia and two saurok had blossomed to a dozen.

There had been no reason for Iree to be here other than her own need for an outlet to her anger. The saurok seemed a good target, being the unnatural and invasive creatures they were. Perhaps the Mantid would reward her for their hides later. However, the woman began to question the intelligence of her decision as another Saurok heard the commotion and hurried to join in.

Iree punched one in the throat as it lunged toward her from the right. Another’s face met her hoof as it tried to take advantage of the other Saurok’s attack. But their target was a Monk, and she did not get distracted. She did not lose focus.

Eventually, though, she would tire.

Despite the handful of creatures already on the ground or attempting to slither away from her, the mob continued to grow.

There were now twelve against her one.

No, make that thirteen. No, back to twelve.

They seemed to replenish their numbers–and grow even–for every one she defeated. Iree realized she had underestimated the size of this Saurok camp.

She also realized they were pushing her slowly towards the base of the great wall dividing the Dread Wastes from the rest of Pandaria.

A saurok felt her fist meet with the side of its skull as it clumsily pitched forward. She kicked the air from the lungs of another. One caught her leg with its sharp talons and she cried out and quickly spun the opposite way, driving an elbow down into its neck. As it hit the ground, Iree twisted without putting her weight on the injured leg and kicked another Saurok in the face.

Red blood ran down the blue skin of her calf, but there was no time to bandage it or speak the words of a healing spell.

But their numbers continued to grow. Iree began to tire, her leg throbbing in the spot the Saurok had grabbed her, and she realized the wall loomed even closer than before.

A saurok snapped a mouthful of sharp teeth very close to her face and Iree punched it away. She had let it get closer than any of the others so far. She could not let that happen again.

Iree spun, her injured leg sweeping through the mass of lizardmen bodies. Several were knocked away, but several more avoided the kick and leapt in at her from behind it. A great press of scaly bodies came in on her, a wall of hot, rank breath and sharp talons. Ireenia punched out at one Saurok, but another grabbed her arm. A third dug its nails into her opposite shoulder.

With a pained shout, Ireenia swung backwards and caught the third Saurok in the chin with her elbow, causing a crunching noise and violently snapping the creature’s head back. But another lizardman greedily grabbed her arm just as it came free of the other’s face.

Ireenia knew there was no breaking out now, but she swore she would go down swinging. Somehow, it was refreshing to think it would end this way–that she would die fighting, instead of old and alone.

As she had the thought, the shriek of a bird of prey pierced the air. The giant raptor’s claws dug into Iree’s shoulders and she screamed an epithet as the storm crow lifted her into the air among the flutter of blue-feathered wings.

The saurok cursed and clawed at her, tearing up her legs as she rose.

Ireenia rose as brilliant points of light descended into the dense clump of lizardmen. She watched as those falling stars were met by the screams of a dozen or more of the lizardmen.

“Your timing is impeccable,” Ireenia said, not sure if she meant it as grateful or sarcastic.

“I do enjoy making an entrance,” Skeiron replied. Were a beak capable, Iree knew there would have been a wide smile there.

Once both were back on the ground, an uncomfortable silence settled between them.

Skeiron spoke first. “Getting yourself into trouble again I see.”

Ireenia did not know how to respond to that. They were not the words she had expected to hear. Though, truth be told, she had not expected his appearance or his words at all. “We do what we’re good at, right?” She swallowed and paused. “Well… I didn’t figure on having to explain myself.” She crossed her arms before her, scowling.

“So you went into that fight not planning to walk away from it?”

“Perhaps.” Iree shifted uncomfortably from one hoof to the other, and not entirely because she hurt all over, though her clawed and bleeding legs throbbed. Not only did she not want to explain herself, she did not know–or want to know–where this conversation was going.

Nowhere good, certainly. Probably to an I told you so and a quick goodbye.

She glanced around for an easy escape, but Skeiron had chosen his landing well–the top of the Pandaren wall, between the Dread Wastes and the Valley of the Four Winds. She considered diving off, but doubted the speed with which she could transform into her dragon-self.

She did not look him in the face, especially with him back in his true form as a Night Elf. Despite her gaze being on the bricks below her hooves, Iree felt his eyes upon her.

“That would have been quite a shame,” Skeiron said softly.

“Hmm,” Iree responded. “Then, I guess it is good you came by when you did.”

“Well, that was no accident,” he admitted. “I was looking for you.”

Iree tensed, unsure how to reply. “I still had some tricks left…” she sputtered uncertainly.

She felt him come closer, but still could not look up. Then, he was standing in front of her. Before she could think of how to respond, Skeiron set his hands on her shoulders.

She flinched at his touch, but at the same time savored it.

“You don’t have to be the strong one all the time, you know,” he chided, his voice a soft whisper. He touched her cheek lightly with his fingers.

Iree’s eyes flickered to the violet skin as it brushed against hers.

“I’m not so strong,” Iree admitted. “I’m just good at hiding the hurt. Stubbornness–that’s what I’m told I’m best at.” As she spoke, moisture began to form in her eyes. It made her angry and she made a face, blinking and wishing them away.

“I know, I just needed you to finally admit it.” The elf pulled her towards him, and wrapped his arms around her trembling shoulders.

She could not hold back the wave of emotion that hit her. A sob wrenched her throat.

“Don’t cry, dragon,” Skeiron whispered as he held Ireenia tighter. As happy as she was at that moment, the comment made her cry harder. His fingers stroked her hair and both stood silent for several moments, only the sound of her sobs causing any noise between them.

Finally Ireenia pulled back slightly, so she could look into Skeiron’s eyes. “I was afraid…” she began, the rest caught in her throat. The Night Elf studied her, seemingly for the first time so intent was his gaze, as she collected herself. It intimidated her, those luminescent eyes that seemed to see inside of her, but they were gentle and reassuring. He touched her face, and with a deep breath and the presence of his fingers, Ireenia made herself continue. “I was afraid I would never be here again.”

“I was afraid you did not want to be,” Skeiron whispered.

A breeze ruffled the feathers of his headdress and cloak, and it reminded Ireenia of flying with him. She pictured him once more as the blue-feathered storm crow, wings spread and gliding along beside her in her dragon-form.

“When I heard the roar that shook the Vale, I knew it was you and I knew I had to find you,” he continued. “There was no mistaking the source of that.”

Ireenia nuzzled her face into his neck, content to be touching him, and not wanting to let go. She did not interrupt as he continued.

“Because that roar echoed the ache of my own heart.”

That tore another sob from her. “I’m so sorry,” Iree said, her voice tremulous. “I don’t know if I can ever make it right again, but I want to try.”

Skeiron hugged her tighter and nodded into her hair. “So do I.”

This story and all related material are the original works of Awaiting the Muse and Effy J. Roan AKA Effraeti. All rights reserved.

Awaiting the Muse by Effy J. Roan AKA Effraeti is licensed under a Creative Commons Attribution-NonCommercial-NoDerivs 3.0 Unported License.