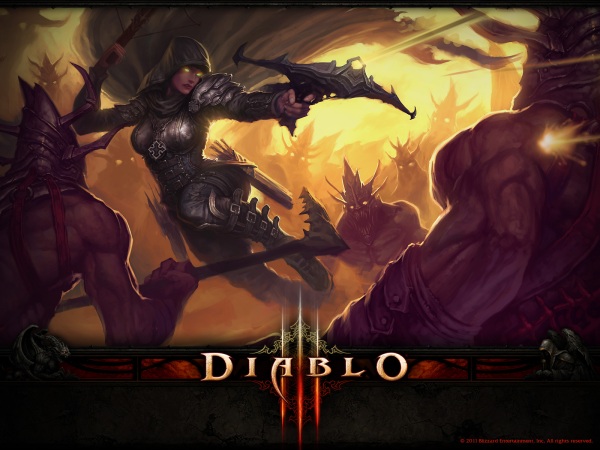 “Vengeance!” she cried, her voice piercing the inky darkness much as her crossbow bolt pierced the soft, decaying bodies of half a dozen zombies with a single shot.  Seeing them fall, this time not to rise again, gave her a thrilling rush of satisfaction.  Each falling demon-spawn felt as one painful pin of sorrow removed from her heart.

Ylenia allowed herself no time to further revel in the one joy remaining to her, as more of the undead were scrabbling from the ground.  They toppled over headstones and jostled one another in their awkward awakening, but soon found focus on the young woman in their midst – the source of the maddening smell of living flesh.

Three more zombies fell, perforated in numerous places.  A bolt had deeply pierced the skull of each, ensuring there was no way they would crawl after her or catch her unawares.

It was then that Ylenia caught sight of a monstrosity even more grotesque than the rest, wide and cumbersome and seemingly pieced together from other corpses.  It waddled towards her at a rate that betrayed its girth and shape.

Hastily constructing a trap to slow the huge flesh-puzzle, she dropped back several feet and began to pelt the thing with projectiles.  At first it came on, barely slowed, then its gait became uneven, and finally after what seemed two dozen bolts and a mere handful of yards from her trap, the grotesque toppled backwards and teetered like a overturned turtle for a moment.

Until suddenly, it exploded into a shower of gore – and cadaver worms!

The worms slithered toward Ylenia, but hit the gooey trap she had laid.  She was thankful to be able to pick them off before they reached her.

She gave an involuntary shiver, and cocked her hand crossbow again.

A cold hand that seemed to leech the very warmth from her skin brushed her shoulder, and Ylenia spun and tumbled in a backwards roll away from the zombie, filling it with bolts as she went.  So tight in around her were they, she almost spun right into another.  The creatures had closed much ground on her while she had been preoccupied with the flesh beast.

She was only able to get off one quick shot – though, it met its mark and fell another – before she was forced to drop back once more.

Another zombie reached for her, and a gasp left her lips unbidden.

Ylenia cursed herself for letting these unintelligent creatures surround her.

Several more bolts flew, but the zombies they stilled barely dented the numbers now advancing on her.

She kicked out with her left foot and knocked a groaning zombie into several of its fellows, bowling them over.

A swing of her crossbow out to the right knocked over a few more.

Still, on they came.

A bellow echoed through the darkness and off the headstones and mausoleum walls of the graveyard.

Swallowing, Ylenia wondered what on Sanctuary could possibly be after her now.

Reaching into her bolt quiver, the woman readied her crossbow once more.  Icy bolts flew, leaving a trail of misty frost and freezing any undead flesh they touched.  The bolts shattered wherever they hit and loosed a spray of ice that froze more, but only for a short time.

Freezing the nearest zombies allowed Ylenia to somersault through an opening and scramble several more yards away.  She barely took her eyes from the approaching undead, but she made several cursory glances in the direction the holler had originated.  There was no sign or sound of whatever had made it.

Cutting through the gloom and fog, a projectile of some sort came flying at her.  Fearing something explosive or else wise devastating, Ylenia tumbled to her right and filled the flying object with bolts.

What landed was the tattered arm of a zombie – now filled with her bolts and looking like the sorry prey of a Quill Fiend.

That left her with more questions than answers, but no time for either, as the zombies continued to come forward.  More disturbing, the distraction of the flying appendage had allowed the undead to once more press in on her.

Ylenia loosed bolt after bolt, dropping many.  She took a few desperate moments to construct another trap, and then somersaulted away to a seemingly empty spot in the dark graveyard.  As she sprang to her feet and pierced more zombies with the ammunition of her crossbow, decaying hands appeared on the surface of the mossy ground at her feet, and several zombies climbed out far too close for the woman’s comfort.

Her most recent trap exploded with enough force to launch the bodies of the six or so nearest zombies through the air in several directions and multiple pieces.

Even that hole in the undead ranks quickly filled in and there seemed nowhere else for her to flee.  The reanimated corpses of the graveyard surrounding Tristram’s cathedral were to every side of her.

Ylenia cursed under her breath that whatever it was out there in the gloom had not wandered off to other parts as she had hoped.

Quick movement to her far left made Ylenia start, and she raised her crossbow and her vision to that area, firing a few shots as she did.  Several of the zombies crowding the back of the group closing in on her went flying through the air like so many ragdolls.  Whatever this unknown source of the explosion of bodies, it roared again.

Something big was coming her way.

The hungry groan of a zombie made her spin, her leg leading, to knock the walking corpse and several others away.  Again her crossbow came up, perforating more.

Though common sense screamed otherwise, Ylenia readied a bolt wrapped with fuel-soggy linen and quickly lit it with match.  She took a step back to where she had temporarily cleared the undead near her, steadied herself, and fired the bolt at the remaining crowd blocking the direction the giant monster bellowed once more from.

Moldering bodies lit like dry kindling, and the confused zombies fell against one another, quickly spreading the blaze to a huge wall of fire that singed the tips of the woman’s hair.

Too hot.  Too close.

Ylenia stumbled backwards, and tripped on the remains of a shattered headstone.

She managed to hold onto her crossbow, thankfully, but took a jolt that rattled her teeth in her head by gripping her weapon instead of catching her fall.

A gasp escaped her and she flinched as more corpses flew through the air – many of them ablaze.  Whatever beast came at her, it was not spooked by the fire.

A glint of metal greeted her eyes, red-orange from the roaring flames.  It was a great axe.  This was no beast, and that concerned her even more, especially as she watched it cut a great, wide swath through the burning zombies.

The smell of charred hair and putrid flesh choked the air.

Another roar split the air, much closer now that Ylenia could see the weapon of whatever – or whoever? – made the noise.

Ylenia kicked the nearest zombie back into the creature’s path, igniting it against the other flaming undead in the process. 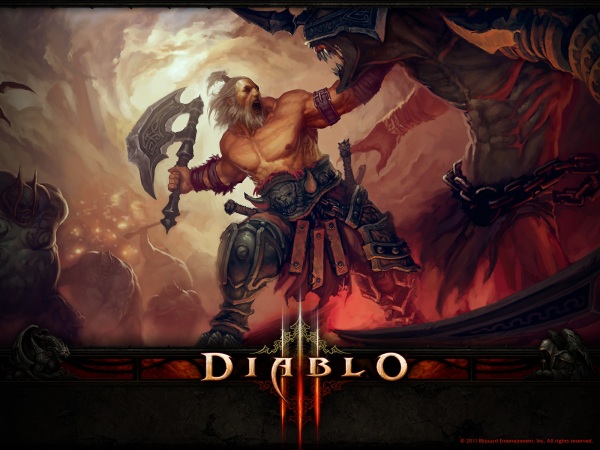 What burst forth was no demon spawn, but a man.  The man was ragged and white-haired, but enormous and swinging his great two handed axe like it were merely one of her throwing knives.  He wore armor that looked to be made of a combination of animal parts and metal.

From the tales and descriptions she had heard of them, this man could only be a Barbarian of Mount Arreat.

Each sweep of that axe cleared half a dozen zombies like they were paper.

In that manner, he quickly cut a path straight to Ylenia, who leveled her crossbow at his head.  She sighted his left eyeball, but held, unsure of his intentions.

He sliced and punched and merely two more great sweeps of his weapon put the man before her, where he finally met her eyes, and stared unflinching at her and her now anxiously trembling crossbow hand.

The remaining zombies were scattered and in a state of wandering and swaying and cannibalizing their fallen ranks.  They kept a wide berth of the pile of those corpses that still burned, mere feet from the giant man towering over Ylenia.  The flames outlined his figure in an orange halo of flame and cast deep shadows over his craggy face, which sported a deep scowl.  His thoughts were unreadable.

Still Ylenia held.  Still she wondered at the man’s next move.

When he finally shifted, her trigger finger was so taunt she almost fired, but she quickly realized he was offering her a hand up.

His face was yet impassive, but when she did not move to take the offered hand, he finally said, “You can lay amongst the dead or return to the living.  Your choice” Besides the slight twitch of his lips as he spoke, only his left eyebrow moved ever so slightly up at the comment.

Ylenia immediately thought to refuse the hand and offer a sharp retort along the lines of “Listen, grandfather, who do you think you are?” in reply instead, but for some reason she laid there silent.  She did bring herself to lower her crossbow, and at that, the man leaned a bit closer to make his hand easier to grasp.

Reaching up and grabbing the hand, the woman started to respond, “I had everything under con…”  She broke off as their hands met.

It was like a spark of recognition registered between them – like she somehow knew this man whom she was near positive she had never seen before.  His was a face she would not likely forget, weather-lined and aged like tanned leather, with crystalline blue eyes that flashed like sunlit ice chips and hair the color of snow.

Ylenia mentally likened him to one of the mountains where his people made their home.

The Barbarians did not often stray far from Mount Arreat – at least, before the shattering of the World Stone and their whole purpose for being.  She had never been there, either before or after, but she had heard tales.

Coming back to the moment, Ylenia could tell the man witnessed the spark too, as he crinkled his brow questioningly showing the most emotion he had so far.

“Have we… met… somewhere?” the man asked.

Ylenia was momentarily without words.

“So it would seem,” Ylenia finally managed.

“I am Hrothgar, of the Cave Bear Clan” the Barbarian offered.  “I seek the fallen star.”

Raising an eyebrow, Ylenia introduced herself and added, “I journey with the same purpose.”

“It seems our separate paths become one, Ylenia.  Perhaps there is something we can offer one another in a partnership,” Hrothgar said with a terse nod.  Then, he added, “At least, for a short time.”

“Indeed,” Ylenia replied.  Her tone was one of curiosity and yet wary, but as Hrothgar swung his great axe up to rest upon his shoulder and started toward the Tristram Cathedral, she followed, her crossbow already loaded for whatever might come between them and their goal.

“Oh, and try and remember to point that thing at the undead,” Hrothgar quipped back, not looking at her.

Ylenia snorted and adjusted the weapon, but afforded him no reply.

Hrothgar, of the Cave Bear Clan – Property of Blizzard Entertainment

This story was originally published on Effraeti’s RP, on June 7, 2012. All rights reserved.

This story is based on worlds and characters in Diablo 3.