I am inspired to post this by Matty’s tiny stories.  This is not a fully formed piece, but something that has been bouncing around in my head.

And then there is the song bouncing around in my head today, Epiphany by Staind.  Epiphany is a great word BTW.

The nightmares had been getting worse since the loss of their warband.

Many nights, Caerise awoke to Grarr thrashing and crying out in his sleep.  It was all she could do to nuzzle him and purr against his throat and chest until his claws retracted and his cries tapered off to a deep-throated growl.  Those mornings, he was always bleary-eyed and haunted.

The longer it went on, the more aloof he became.

This evening, he sat hunched over at the campfire, his tasseled tail flicking back and forth anxiously.  He watched its flames as they hypnotically leapt and retracted – left, right, right, center.  Caerise could see each snap and crackle reflected in his dark eyes.

It was late, and the moon was getting low on the horizon.  An unbidden yawn escaped Caerise, and she stretched her full length before resettling herself.  But she was restless and weary.  A pervasive silence had crept between them, punctuated by fatigue.

“Come and rest with me,” Caerise purred.  She padded silently to his side and rubbed her head affectionately against his left arm.  “You must be exhausted, and the sun will rise with you still sitting there at this rate.”

Grarr waved her away absently and growled softly.  “I am not tired.  I might go walking,” he said abruptly.  Even through the dark fur on his face, the bags beneath his eyes were apparent in the orange light the fire cast.

Despite his response, he did not move.

Caerise watched him a moment more, and then uttered a disappointed sigh before she could catch herself.  “As you wish, love, but should you change your mind, I will keep your place beside me warm.”

He made no motion or sign that he heard her.  His gaze was far off.

This story and all related material are the original works of Awaiting the Muse and Jamie Roman AKA Effraeti. All rights reserved.

This story is based on worlds and characters in Guild Wars 2.

My wee Necro, Noira, and my one of my favorite story Asurans – Zojja.

Apparently the word “Excelsior!” is a favorite exclamation of the Asura.  I find this quite amusing.

Yup, back to fiddling with story stuff in Guild Wars 2.  I figured I would.  I am mostly sticking to my Human Guardian, Rosaelyn, as she seems most capable on her own so far.  But I could not help starting an Asuran and seeing what their story looks like.  The story, and OMG Rata Sum, are both very cool.

Yah, I did try Torchlight 2 at one point – for about 20 minutes Friday night.  I was all squee about having a pet, of which I picked a wee papillon.  But it was a lot of pew-pew and not a lot to hold my attention early in the evening on a Friday.

I also finished Edge of Destiny.  Which made me cry.  (I thought that was hugely ironic – considering the week I have had.)  I am now finally working on finishing the last Eragon book – Inheritance.  I know!  Where have I been??  In my defense, I bought it in hardcover right about the time I started reading on my phone through my Kindle app.  So it was hard to justify toting around a big azz hardcover book, when I can READ on my PHONE! 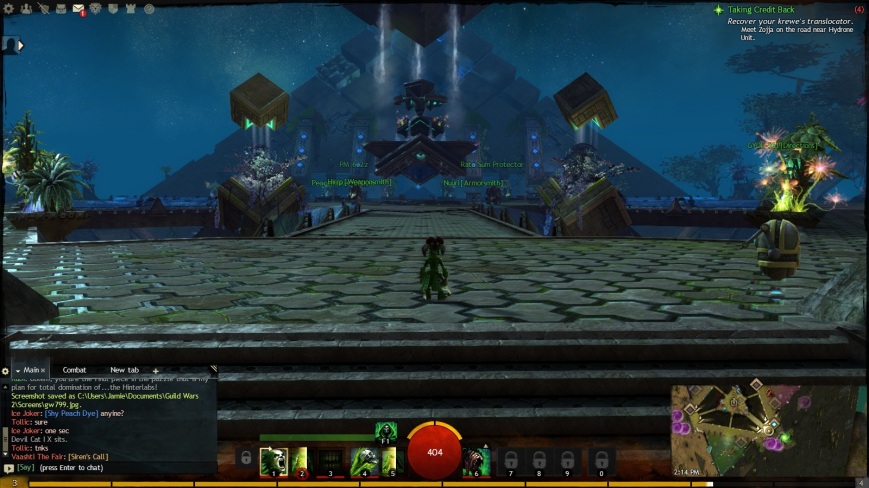