This is the tale of how the People learned to walk with An’she and harness his light.

Heraqawa was a young brave of the Shu’halo, we who are called Tauren by the younger races.  He was just coming of age when the Quillboar attacked Camp Narache.  Never before had he fought anyone but his brothers and sisters in the games young ones use to train for adulthood.

A large two handed hammer was given to him to fight, and it sat well in his hands.  It was passed down, but well taken care of and well crafted despite its simple construction from stone and wood.  Heraqawa swung it several times before leaving the camp, both to better acquaint himself with its balance and to warm his muscles for the coming battle.

Heraqawa was young, but already he was strong in spirit and body.  He used his anger, instead of letting it use him, and fell many foes during the battle.  There was no regret in what he did, only grim resolve.  Like many of the People, Heraqawa was slow to action but fiercely committed to following through and preserving the balance.

The battle was long, but the Quillboar were driven back by Heraqawa and the other braves.  It was not until his hammer found no more enemies that Heraqawa became aware of the weariness of his body.

But there was no rest to be had that evening.

Upon returning to Camp Narache, there was still work to be done.  The Quillboar had attacked suddenly and viciously, but the Shu’halo had proven their strength and now they demonstrated their perseverance.  All that was damaged by aggression or fire was attended to, the injured were healed, and the dead were laid out on raised biers to give back to the Earth Mother.

Heraqawa worked alongside his mother, a tribal Shaman, and assisted in the recovery of the People both physically and spiritually.

On the dawn of the next day, all of the Shu’halo of Camp Narache, along with many from the surrounding tribes and even some from Thunder Bluff, came to send off the dead.  Most prominent among those given back was Greatmother Hawkwind.

Heraqawa had little to offer, but had fetched a pitcher of water from the village well.  He set it beside the Greatmother’s bier, and it was in a moment of sorrow that he realized he would never again fetch water for her.

He remembered her words and they seemed long ago:

“Remember that even the most humble task can gain the recognition of elders.“

Once more, the young brave was humbled by her wisdom.

Chief Hawkwind spoke then, both proud and true:

“Earth Mother, into your arms we give one of our own. She is Unaya Hawkwind, my mother, and Greatmother to us all; the wisest of our tribe.

“May her spirit fly to you swiftly; may the winds carry her gently, and the grass whisper her name.

“Watch over her as she has watched over us; let her look down on us with joy, through the eternal gaze of An’she and Mu’sha, until we too join her in death.

“For we are all born of you, and shall all return to you.”

Chief Hawkwind bowed his head in silent reverence and reflection when he finished saying the words, as did those gathered around him.  A peace descended on all, and they knew the Earth Mother and their ancestors were looking down on them as they lovingly embraced the dead and guided them into the afterlife.

Now, even though Heraqawa had proven himself in battle, there was still much more for him to learn.  Long had been the training of his body.  Now his spirit needed guidance as well. 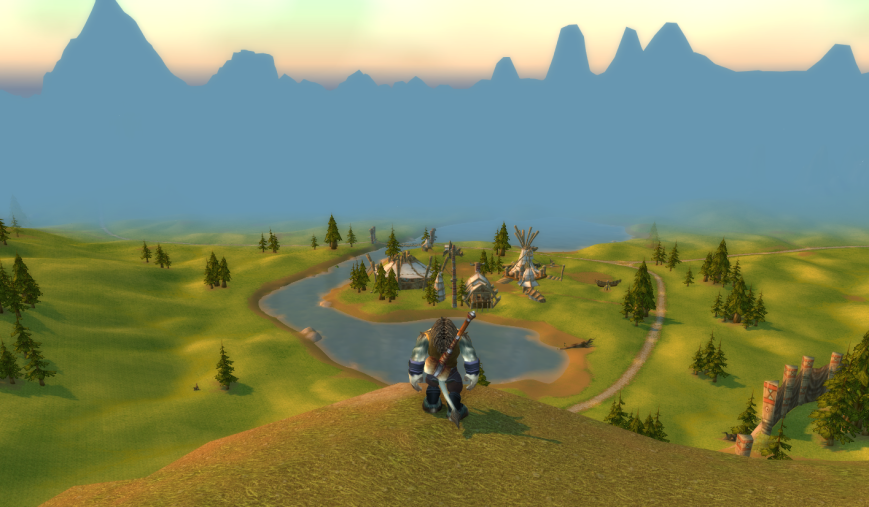 As with all young Shu’halo, he journeyed high up onto Fargaze Mesa.  It overlooked all of the lands of Mulgore, home to the once nomadic People.

There he met with Elder Dyami Windsoar who told him:

“Drink deep of the Water of Vision and let the spirits guide you onward.”

It was time for Heraqawa to discover the animal spirit that would guide him through his life’s journey.

Heraqawa’s parents were both greatly respected in the tribe.  His mother, a Shaman, walked alongside the gentle spirit of the Deer and it guided her in healing wounds and curing ailments.  His father, a Druid, soared with the ever-mutable Raven and gave insight and counsel to the elders with the help of its wisdom.

Sitting inside the ritual circle on top of the mesa, Heraqawa drank.

With his eyes closed, Heraqawa waited quietly, he sought to temper his excitement over what the spirits might show him by focusing on his other senses.  He listened to the soaring birds as they cried while hunting and the crackling of torches.  He breathed in the smoky fragrance of burning incense.  He tasted the tangy, bitter after flavor of the Water of Vision on the back of his tongue.  He felt the solidity and coolness of the ceramic bowl in his hands.

A new noise joined the others, which were muted now.  It was a both like the fluttering of wings and like the warm crackle of a campfire.  Heraqawa opened his spirit eyes.

Before Heraqawa was the most majestic creature he had ever seen.  No woodland creature nor plains beast nor even the hunters of the sky could compare.

Heraqawa had heard of the great Thunderbird that guided some, had seen the totems carved in its honor, but even the thunder and lightning held no dominance over the creature before him.  It was a bird formed of fire, as if the sun itself had grown wings to come down and speak to Heraqawa.

Then, the Firebird spoke:

“The balance is shifting and the People will need to adjust with it to continue forward.  For that reason, I come to offer you and other chosen brothers and sisters guidance through the dark.

“You will learn to walk with the sun ever at your shoulder and call upon An’she’s light to assist you.”

Heraqawa was quiet as he worked to absorb the information.

“I shall be your guide in this journey,” the Firebird said, “as the Deer to your mother and the Raven to your father.  You shall walk the path of light, and you shall be among the first of the Sunwalkers.

“There is much to do and much to learn.  So now, you must awaken.”

And Heraqawa did, but he awoke changed.  He felt the warmth of the Firebird inside his breast and from there forward, even during the storm and the dead of night, Heraqawa always felt the sun upon his face.

This story was originally published on Awaiting the Muse, on January 12th, 2013. All rights reserved.

Based on a work at https://awaitingthemuse.wordpress.com/

2 thoughts on “The Firebird and the Sunwalker”